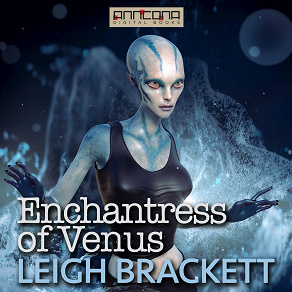 Enchantress of Venus is a science fiction novella by Leigh Brackett. This is the second story to feature Brackett’s hero Eric John Stark. Using the best elements of space opera and fantasy this novel is a pure alloy of sci-fi and sword & sorcery. Leigh Brackett has created a true classic of the space opera genre.

In Enchantress of Venus, John Stark ventures into the brigand town of Shuruun, a muddy, sullen den of sin on the shoreline of Venus' Red Sea, looking for his vanished friend Helvi.

Stark was born on Mercury. His parents were employees of the mineral extraction company Mercury Metals and Mining. After his parents died in a cave-in caused by a quake, Stark was adopted by a tribe of Mercurian aborigines who are described as hairy and possessing snouts. They gave him the name N'Chaka, meaning "the man without a tribe". He believed himself to be one of them, rather than a human, and endured their rigorous way of life in the Mercurian Twilight Belt, surviving by hunting rock-lizards.

Before Stark was fully grown, another group of human miners exterminated his tribe, captured Stark and imprisoned him in a cage. They would ultimately have killed him if he had not been rescued by the police official Simon Ashton, who raised Stark to adulthood.

The stories of the adult Stark are fast-paced adventures, but Brackett manages to insert more pathos than most authors. Because of his background, Stark is keenly aware of the injustices visited on the planetary "primitives" by the colonialist Earth, and tends to side with them against official bodies.

The novella was included in The Best of Leigh Brackett (Ballantine Books, 1977)