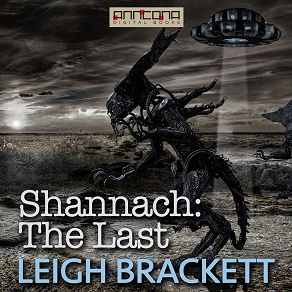 Shannach: The Last is a science fiction novella by Leigh Brackett.

Even in this grip of alien horror a man could not throw away his lifetime goal … not stand idly by as endless rows of alabaster shapes, seated in their chairs of stone, thought-ruled this gargoyle planet from the dead blackness of deep Mercurian cavers.

In Shannach: The Last we are at the desolate and forbidding Twilight Belt on Mercury, where Eric John Stark was raised. A man is looking for super precious sun-stones when he comes upon an enslaved people in thrall to a dying alien intelligence. In this tale's harrowing opening sequence, our intrepid miner is trapped deep beneath the planet's surface in a cave system that will be a rough ride for any claustrophobic…

The novella was included in The Best of Leigh Brackett (Ballantine Books, 1977).