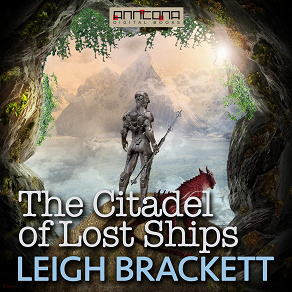 The Citadel of Lost Ships

The Citadel of Lost Ships is a science fiction novella by Leigh Brackett.

This is pure space opera from the undisputed “Queen of Space Opera.”

It was a Gypsy world, built of space flotsam and shipwrecks, peopled with the few free races of the Solar System. Roy Campbell, outcast prey of the Coalition, entered its depths to seek haven for the Kraylens of Venus – only to find that it had become a slave trap from which there was no escape.

The Kraylens are a dying tribe, a scrap of old Venus, but Campbell is determined to help those that had helped him!

"Roy Campbell woke painfully. His body made a blind, instinctive lunge for the control panel, and it was only when his hands struck the smooth, hard mud of the wall that he realized he wasn't in his ship any longer, and that the Guard wasn't chasing him, their guns hammering death.”

The Citadel of Lost Ships was first published in Planet Stories magazine in 1943. In 1944 the novella was a finalist to Best Retro Novelette Hugo Award.  Reading by Phil Chenevert, total running time (TRT): 1hour, 36 min. Also available as e-book (ePUB).